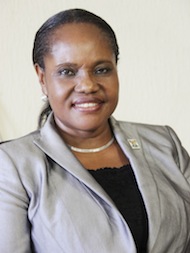 This follows the retirement of the former HOS, Mrs Josephine Williams last Thursday after spending 35 years in the employment of Lagos State.

Jaji’s appointment was announced to newsmen on Monday at a news conference by the State Commissioner for Information and Strategy, Aderemi Ibirogba at the Bagauda Kaltho Press Centre, Alausa in Ikeja, Lagos, Southwest Nigeria.

According to Ibirogba, Fashola has approved the appointment of Jaji as the new HOS following the retirement of the former, saying that her appointment took immediate effect, saying that government believed she would contribute her quota to the development of the State Public Service.

Jaji will retire from the Public Service in October 2015, meaning that she will only be HOS for eight months.

But Ibirogba said for the fact that she would spend a short term as HOS does not matter, but that what is important was that as the most senior Permanent Secretary and now appointed HOS, she would certainly contribute to the progress of Lagos state.

“She is the most senior Permanent Secretary, she was not appointed by quota but on seniority basis which has been the tradition of Lagos and she was appointed because of her intelligence and we believe she will give her best,” Ibirogba said.