IS says it has beheaded 21 Egyptian Christians 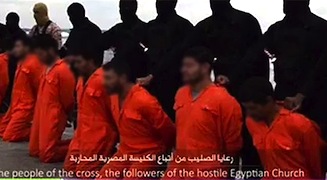 File Photo: IS fighters line up Egyptian Christians to be beheaded

The Islamic State group in Libya released a video on Sunday purportedly showing the beheading of 21 Egyptian Coptic Christians, prompting Egypt’s president to threaten a “suitable” punishment for the killings.

President Abdel Fattah al-Sisi said his country reserved the right to “punish these murderers” as he called a meeting of security chiefs and declared seven days of mourning after the video was distributed by jihadists on social media.

The footage shows 21 handcuffed hostages wearing orange jumpsuits being beheaded by their black-suited captors on a beach the group said was in the Libyan province of Tripoli.

In the latest issue of the IS online magazine Dabiq, the group had said the same number of Egyptian hostages were being held in Libya.

The Coptic Church issued a statement saying it was “confident” the killers would be brought to justice as it confirmed those beheaded were Egyptian Copts, while Al-Azhar, the prestigious Cairo-based seat of Islamic learning, denounced the “barbaric” killings.

Egyptian state television broadcast some of the footage from the IS video without showing the beheadings but depicting the hostages marched along by their captors on a beach.

“Egypt reserves the right to respond in a suitable way and time to punish these murderers,” a visibly angry Sisi said in a televised speech.

The security body that is meeting in Cairo includes Sisi, his defence and interior ministers and military commanders.

Egypt last year denied reports of having carried out air strikes on Islamists in Libya, but US officials said its ally the United Arab Emirates carried out the strikes using Egyptian bases.

French President Francois Hollande, whose government is poised to sign a deal selling Egypt advanced Rafale fighter jets on Monday, expressed his “concern at the expansion of Daesh in Libya,” referring to the Islamic State group.

The group has been hammered by US-led air strikes in Iraq and Syria after it took over swathes of the two countries, and has active affiliates in Egypt and Libya.

Libya’s embattled parliament, which is locked in a conflict with Islamist militias, expressed its condolences in a statement and called on the world to “show solidarity with Libya” against militants.

The UN’s mission in Libya called for the group’s actions to be “rejected and denounced by all Libyans”.

Sunday’s video, entitled “A message signed with blood to the nation of the cross”, has a scrolling caption in the first few seconds referring to the hostages as “People of the cross, followers of the hostile Egyptian Church”.

One of the masked captors, wearing a military uniform and pointing a knife to the camera said in English: “Today we are in the south of Rome, in the land of Islam Libya… the sea you have hidden Sheikh Osama bin Laden’s body in, we swear to Allah we will mix it with your blood.”

Al-Qaeda founder Bin Laden was shot and killed in a dramatic helicopter raid by US special forces in Pakistan in the early hours of May 2, 2011 and later buried at sea in an unidentified location.

After the beheadings, a scrolling caption on the footage said: “The filthy blood is just some of what awaits you, in revenge for Camilia and her sisters.”

Egyptian women Camilia Shehata and Wafa Constantine were the wives of Coptic priests whose alleged conversion sparked a sectarian dispute in Egypt in 2010.

Shehata went missing for five days in July that year after a domestic argument before police found her and escorted her back home.

When she went missing, Coptic Christians staged protests, but when she was returned, Islamists took to the streets alleging she had willingly converted to Islam and was being held by the church against her will.

Wafa Constantine also went missing, in 2004, reportedly after her husband refused to give her a divorce. She was temporarily sequestered at a convent as reports of her conversion were circulated.

The latest IS video comes just days after the jihadists released footage showing the gruesome burning alive of a Jordanian pilot the group captured after his F-16 came down in Syria in December.

In January, the IS branch in Libya had claimed it had abducted 21 Christians.