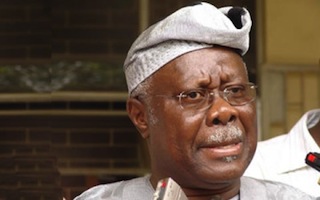 Obasanjo had in reaction to the postponement of the February 14 polls, alleged that it was done to further the interest of President Goodluck Jonathan.

Chief Olabode George, a former Deputy National Chairman of the PDP condemned the statement while addressing a press conferences in Lagos.

The PDP chieftain expressed dismay over Obasanjo’s verbal attacks on the president.

Bode George, who called for caution, said “it is unsavory and unjust to compare Jonathan to Laurent Gbagbo.

“Baba has served his own term, he has played his roles. I don’t want to conclude that his life would end up like Saul in the Bible.

“I will also want to call on our Obas to talk to Baba that he should remain at that pinnacle of respect because it is becoming too personal. No human being is perfect.”

‎On the postponement of the general elections, George faulted the former president’s position.

“If Baba had attended the Council of state meeting in Abuja, he would have understood why the elections were postponed.”