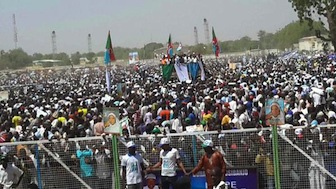 Mammoth crowd at the APC presidential rally in Borno State

A massive crowd of cheering supporters mobbed Nigerian opposition leader Muhammadu Buhari in the embattled northeast city of Maiduguri on Monday, as the candidate vowed tough action against Boko Haram if elected.

People flooded the streets surrounding the airport in the Borno state capital before Buhari’s arrival, defying security fears in a city repeatedly attacked by the Islamist militants.

Boko Haram was founded in Maiduguri in 2002 but since the movement turned violent in 2009, the once bustling trading hub has been devastated.

Markets have been bombed regularly and scores of civilians shot dead in their homes.

“If we get the people’s mandate… Nigerians will begin to see a government that really care(s),” he told the crowd after visiting the area’s top Islamic cleric, the Shehu of Borno.

“It is not going to be easy, tackling the insurgency, but we are determined to face it squarely,” he said.

Buhari’s drive from the airport to the Shehu’s palace — which normally takes 10 minutes — lasted more than two hours as people thronged the streets seeking a glimpse of the presidential hopeful.

Jonathan, who visited Maiduguri last month, has come under intense criticism in the region for his perceived lethargy in dealing with the Boko Haram insurgency.

Three years of relentless attacks in Borno prompted a state of emergency and the promise of decisive military action.

But the offensive appeared to achieve nothing, and reports suggested that troops sent to Borno often lacked ammunition and basic communication equipment as the insurgents seized large swathes of territory.

The military has however claimed significant gains in Borno this month following the launch of a joint operation with Nigeria’s neighbours.

Buhari has not articulated a detailed plan to crush the uprising but has repeatedly promised to get troops proper equipment to fight an increasingly well-armed extremist movement.

After meeting the Shehu, Buhari attempted to move to the nearby Ramat square to address a campaign rally but again his movements were slowed by a mass of supporters.

An AFP reporter said the trip, which normally takes five minutes, took more than an hour and that the crowd at Ramat was perhaps the largest ever gathering in Maiduguri.

The boisterous crowd virtually drowned out the candidate’s speech, the reporter added.

Buhari, like most in Maiduguri, is a northern-born Muslim, giving him a clear political edge in the city over Jonathan, from Nigeria’s mainly Christian south.

But Buhari is also an ethnic Hausa, a group that has a long history of tension with the Kanuri of Borno, the dominant ethnic group in Boko Haram.

Experts say his support in the area likely runs deeper than religion and tribe.

The economic breakdown caused by the unrest, as well as school closures, travel restrictions and widespread bloodshed has left the community clamouring for change, experts say.

Many see Buhari, partly because of his military background, as better placed to stamp out the raging insurgency.

The vote, expected to be the closest ever in Nigeria, had been scheduled for February 14, but security fears forced a six-week delay to March 28.