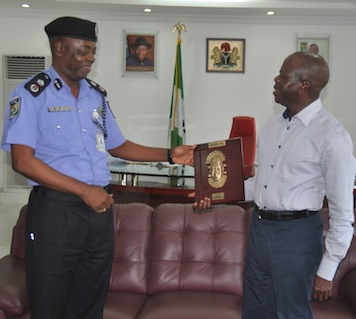 Governor Adams Oshiomhole of Edo State on Monday charged the police and other security agencies in the state to investigate and apprehend some desperate politicians who allegedly go about purchasing Permanent Voters Cards (PVCs), from eligible voters with a view to disenfranchising them in the forthcoming general elections.

Governor Oshiomhole gave the charge when he received the newly deployed Commissioner of Police for the state, Samuel Damilola Adegbuyi, who paid him a courtesy visit in his office.

“Everyday I hear reports about some desperate politicians buying PVCs from people, particularly villagers and even non-villagers, sometimes for as much as N5,000,” Oshiomhole said.

He added that: “I am trying to understand what anybody can do with this, it is not clear. Somebody called me this morning to say that two persons came to him to complain that they gave them N5,000 in lieu of their PVC saying they were going to keep it for them and then they destroyed the PVC in their presence.”

The governor who noted that “government is spending huge resources to get everybody registered, noted that “so much resources have been spent by government to get people to collect their PVC, yet some people want to disenfranchise some persons by paying them to surrender their PVC. We are going to sustain our enlightenment campaign and let our people know that because these cards are permanent, if you sell it now, you have sold your birthright for the forseeable future.”

“My understanding is that these cards are not just for this election but also for future elections and if you sell yours now, the process of reproducing new ones may not be that easy. We will sustain our sensitization but I will like to encourage you that if we find any cases of people buying this thing illegally to use them for illegal purposes, I want to plead with you to do what you have to do so that we can prosecute one or two persons so that it becomes an example to other desperate people. I assure you that whatever we can do, we will do.”

Oshiomhole stated that, “in this state, we launched one man, one vote and we naturally count on the police to ensure that Nigerians are able to vote without fear and that there is security to ensure that the votes are actually counted that whoever wins or loses, there is peace and security before, during and after the elections.

“There is no pretending to the fact that you are assuming duty at a very critical period. Even at that, I think your predecessor and his officers worked so hard and so efficiently that we have not had the kind of crisis which some states have witnessed in the course of electioneering before the recent postponement.

“I believe the police have been fair in providing security for all those who have stepped forward to market themselves and that have gone a long way in ensuring we have not recorded any negative incident,” he said.

Earlier, the new Commissioner of Police to Edo state said “I and my officers will do everything humanly possible to continue with the peace, the crime control and management already in place.”

He assured the government and the people of Edo state that he will continue to work hard towards the peace, security and unity of Edo state and to synergize with other security agencies in order to renew the security steps already in place.

He used the occasion to solicit the cooperation of the state government towards successful crime fighting in the state.