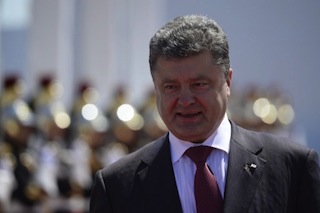 World powers voiced concern over a shaky truce in Ukraine that went into a third day Tuesday with no sign of a let-up in fighting for a key eastern town and no pull-back of heavy weapons from the frontline.

The United States and Germany called for a stop to the hostilities and urged free access for OSCE monitors blocked from entering the hotspot town of Debaltseve, a fiercely fought-for transport hub between the rebel-held cities of Donetsk and Lugansk.

Intense shelling was heard in the Debaltseve area early Tuesday, AFP journalists reported from the neighbouring town of Soledar.

Rebel trucks could be seen hauling artillery cannon along roads through snowy countryside in sunny though freezing weather.

A government official in Debaltseve, Ilya Kiva, told AFP by telephone there was combat in the town, with rebels using small arms and rocket-propelled grenades. There were casualties, but he could not give figures.

“If we are not allowed to open fire, we may lose control of the situation,” Kiva said.

Under the terms of a deal brokered by Germany and France last week and agreed to by Ukraine, the rebels and Russia, a “comprehensive” ceasefire is supposed to be in effect since Sunday.

That truce has been “largely” observed, except around Debaltseve and sporadic incidents elsewhere, according to EU officials and the Organization for Security and Cooperation in Europe (OSCE) on Monday.

Under the deal the warring sides were from Tuesday meant to have started withdrawing their heavy weapons from the frontline.

But there was no indication of such a pull-back. Kiev officials and the rebels say truce violations by the other side are preventing that.

“Shelling is ongoing, so there is no ceasefire and the conditions for withdrawing heavy weapons have not been met,” a Ukrainian defence spokesman, Andriy Lysenko, told the Interfax-Ukraine news agency.

The United States called on Russia and the separatists to “immediately” halt attacks in eastern Ukraine.

“The United States is gravely concerned by the deteriorating situation in and around Debaltseve in eastern Ukraine,” State Department spokeswoman Jen Psaki said in a statement.

Ukrainian President Petro Poroshenko discussed the situation with US Secretary of State John Kerry and “expressed concern” about rebel breaches of the ceasefire, especially around Debaltseve, Poroshenko’s office said.

German Chancellor Angela Merkel, Poroshenko and Russian President Vladimir Putin also held a late Monday phone call in which they agreed “concrete measures” to allow OSCE monitors to fulfil their role of observing the ceasefire, according to Merkel’s office.

A Ukrainian defence spokesman, Anatoliy Stelmakh, said Tuesday there was “a slight decrease” overnight in rebel shooting at army positions.

But he still accused the separatists of three times firing Grad rockets at Debaltseve and shooting at troops 15 times near the port city of Mariupol.

Another defence spokesman, Vladyslav Seleznyov, said five Ukrainian soldiers were killed in the past 24 hours of the ceasefire, most of them in or around Debaltseve. Kiev officials have already said another five troops were killed on the first day of the truce.

Ukraine and the West say Russia is fomenting the insurgency, ordering in troops and tanks in a similar operation that preceded the annexation of Crimea last year. Moscow denies the allegation and says Russian fighters seen in east Ukraine are “volunteers”.

On Monday, the EU ratcheted up its sanctions against Russia by blacklisting five Russians, including two deputy defence ministers, along with 14 Ukrainian rebel figures. Russia vowed it would respond to the “illogical” move.