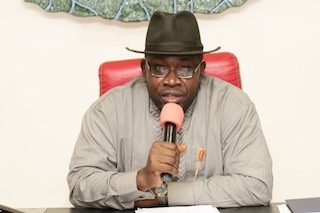 The 11 female Bayelsa politicians who died in an auto crash on Saturday near the Old Ahoada Market road along the East-West road of Rivers state will be given mass burial due to the inability of relations to recognize their charred remains.

It was gathered that the decision was reached with members of the families of the victims because the remains of accident victims were burnt beyond recognition.

It was gathered that the Rt. Hon Seibarugu Werinipre, former deputy governor to Timipre Sylva and state coordinator of Transformation Ambassador of Nigeria (TAN) led the team that conveyed the ashes of and unidentified skulls of the 11 female politicians that were today conveyed to the morgue of the Federal Medical Centre in Yenagoa.

Expert pathologists advised mass burial is a better option due to the fact that the possibility of conducting a Deoxyribonucleic Acid, DNA, test would take up to six months, and that could prolong the psychological torture of deceased families.

Mathew Utolor, husband of one of the victims and staff of the State Broadcasting Corporation told journalists that the families could not identify their loved one. “I could not believe that I cannot identify my wife,” he said.

Similarly, Ambrose Ayebakuro, the 33-year old son of the deceased former House of Assembly member, Hon. Ruby Benjamin, confirmed that they had been contacted that a mass burial would be conducted for the victims. “She was everything to us. But I take solace in the fact that she was close to God.”

Meanwhile, the Bayelsa state governor, Seriake Dickson visited the home of the Secretary to State Government, Prof. Edmund Alison-Oguru over the death of his wife, Mrs. Elizabeth Oguru, in the fatal auto crash at Elele, along the East-West road.

Dickson described the incident as a tragic one, which claimed the lives of female politicians in the state, saying the news of the untimely death of the women came to him as a rude shock, while describing the incident as a painful and terrible blow to the state.

The members of the State House of Assembly led by the Speaker, Hon. Konbowei Benson have also described death as a heartache that no one can heal, adding that, only God has the capacity to console the bereaved.

The only female member of the Bayelsa State House of Assembly, Hon. (Mrs) Agatha Goma, representing Ekeremor Constituency I, whose sister, Hon. Zimbra Pamowei, was one of the victim lamented the untimely death of the women.