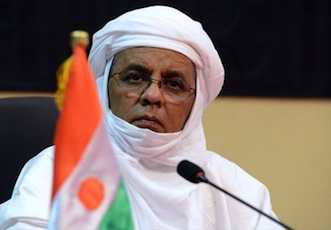 Thousands of people marched in Niger’s capital on Tuesday to protest at Boko Haram Islamists who have launched deadly raids in the country from their base in neighbouring Nigeria.

Prime Minister Brigi Rafini led the demonstrators who marched under a heavy police presence, with snipers posted on roofs of buildings along the protest route, including parliament.

“Boko Haram is itself haram (forbidden),” read one sign, referring to the name of the jihadist group, which roughly translates as “Western education is forbidden.”

The Boko Haram fighters have “nothing Islamic, nothing Muslim about them,” Rafini told AFP at the head of the procession.

Muslims in Niger who were previously “troubled, waiting to see, are now free to say no to Boko Haram,” he added.

“All united against Boko Haram,” read a banner at the march, called by the ruling party with support from trade unions, religious bodies, student associations and non-governmental organisations.

“Our army, our pride,” read another of the many signs — sometimes daubed in the green, white and orange national colours — after Niger’s troops recently joined a regional fight against the brutal sect.

If “someone asks me to take up a weapon, I’m ready for combat,” said 18-year-old Jaafar Ousmane, an enthusiastic student union official, who said that those he represented were “100 percent” behind the security forces.

Boko Haram has waged an insurgency aiming to create a hardline Islamic state in northeast Nigeria since 2009, a conflict that has claimed some 13,000 lives.

In recent months it has extended its raids into neighbouring countries, including Cameroon, Niger and Chad, as they formed a military alliance with Nigeria to combat the jihadists.

Police said on Monday that they had arrested more than 160 people suspected of having links to Boko Haram in Niger’s Diffa region, a border area with Nigeria that was attacked by the Islamists earlier this month.

Boko Haram first struck in Niger three days before parliament on February 9 authorised the army to enter Nigeria to take part in the regional struggle. Some 3,000 troops are posted along the frontier.

Some at the Niamey march voiced fear of Boko Haram insurgents who might have sneaked into the city. “All we hope for is that this ends well, that there are no infiltrators,” a wary local journalist said.

“Boko Haram scares me. We want peace,” said Seydou Zamo, 45, a photographer who added that he shared concern that the armed group, known for suicide bombings, was in the capital.