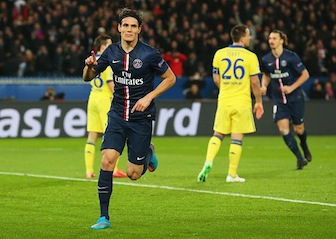 A goal from Edinson Cavani secured a 1-1 draw for Paris Saint-Germain with Chelsea as both of Tuesday’s opening Champions League last 16 first leg matches ended in draws.

Ukrainian champions Shakhtar Donetsk drew 0-0 at ‘home’ in Lviv against German giants Bayern Munich, who played the last 25 minutes with just 10 men as Spanish veteran Xabi Alonso marked his 100th appearance in the competition in unmemorable fashion by being sent off.

Chelsea had got the away goal that they were dreaming of when Branislav Ivanovic scored another vital goal for them in the 36th minute.

The Serbian’s header from Gary Cahill’s flick-on — another central defender John Terry having provided the cross — was his seventh goal in 53 appearances in the competition.

Cavani, though, levelled 12 minutes into the second-half as poor Chelsea defending allowed him a free header from Blaise Matuidi’s cross.

The Uruguayan — who has 17 goals to his name in all competitions this season — should have won the first leg for the hosts when he wriggled free with just 10 minutes remaining and one on one with Thibault Courtois he poked the ball just wide of the far post.

Chelsea manager Jose Mourinho conceded that PSG had looked the most likely winner.

“If you go to chances created and the goalkeepers’ performances we have to be honest and say they had more than us, so if somebody was closer to winning the game it was Paris not Chelsea,” said Mourinho.

PSG handler Laurent Blanc had mixed feelings about the game.

“The score is not favourable to us, but I’m very happy with my team,” said Blanc.

“There were lots of very satisfying things but the score is what counts at the end so the return match will be complicated.”

Shakhtar — who are facing a tough fight to win their sixth successive league crown as they trail Dynamo Kiev by five points — looked like a side that had not played a competitive game since the group match against Porto on December 10.

The Ukrainian side — who have to play their games hundreds of miles away from home because of the fighting between rebels and Ukrainian soldiers — were give hope of at least taking a lead to Munich for the second leg when Alonso was sent-off for a second bookable offence.

Bayern coach Pep Guardiola greeted with the decision with a shake of the head and a grim smile and shortly afterwards decided to sacrifice a striker and remove Thomas Mueller from the fray sending on central defender Holger Badstuber in his place.

Bayern, who only have one win from six visits to Ukraine, then played it out for a draw which should give them enough when they host Shakhtar in the second leg on March 11.

Guardiola, whose first Champions League campaign with Bayern ended with a drubbing at the hands of eventual champions Real Madrid last season, admitted it had been a frustrating night.

“It was difficult because we had to battle against an extra man,” said the 44-year-old Guardiola, who is bidding for a third Champions League trophy as a coach having won it twice with Barcelona.

“We did control the match but we created very few chances.

“It is always more pleasant to score an away goal as now we have to win the second leg. However, I believe we will achieve that,” added the Spaniard.

His Shakhtar counterpart 69-year-old Romanian Mircea Lucescu was delighted despite their rustiness they had not taken a similar hammering.

“The first plan was not to lose,” said Lucescu, who has been in his post since 2004 and guided Shakhtar to victory in the 2009 UEFA Cup, the predecessor of the Europa League.

“The second was to keep our chances alive for the second leg. We did that.

“What I regret is that we didn’t try to play our game when Bayern were down to 10 men.”