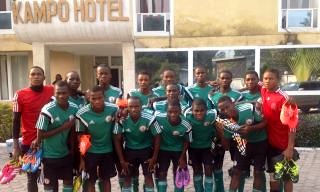 Golden Eaglets pose in front of their hotel camp in Kinshasha

Nigeria’s Golden Eaglets will go into Wednesday’s match with the Young Syli of Guinea with the hope of garnering three points that will see them qualify for the 2015 FIFA Under-17 World Cup in Chile.

The Golden Eaglets were up and running in their first game of the 2015 CAF Africa Junior Championship with a 2-0 win over hosts Niger, thanks to two first half goals by Victor Osimhen and a sumptuous free-kick by skipper Kelechi Nwakali.

Same can be said of the Guineans who also need a win to ease passage to Chile, which guarantees a potentially tasty encounter when the two sides meet at the Stade Seyni Kountche.

Nigeria and Guinea are both tied on three points in Group A, but the world champions are ahead by goals difference as they defeated hosts Niger 2-0 in their opening Group A match while Guinea edged Zambia 1-0.

The last time the two countries met at this level was en route qualifying for the 2013 event in Morocco, where the Eaglets smashed Guinea 3-0 in Conakry and humbled them 6-0 in the return fixture in Calabar for a 10-0 aggregate win.

However Eaglets coach Emmanuel Amuneke is not carried away by the permutations and says every game at the tournament will be treated like a cup final as no stone will be left unturned to see that his team do the business in Niamey.

“I don’t want you to have the erroneous belief that we are the world champions as most commentators always say,” Amuneke, who was part of the silver-winning squad at Morocco 2013, said.

“Yes, Nigeria is the world champion at this level but we have to create our own history by winning something; the past is gone.

“We are not getting carried away after the victory against Niger because we know Guinea can be tricky after watching them against Zambia.”