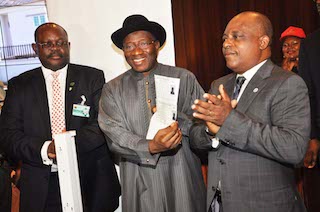 President Jonathan (C) at the launching of the new ID card with him is DG, NIMC, Chris Onyemenam (L) and Prince Uche Secondus (R)

Onyemenam‎ made the disclosure at the National Assembly when he presented the Speaker, House of Representatives, Animu Tambuwal’s e-ID to him‎.

He disclosed that there were 404 NIMC enrollment centres across 774 local government areas in the country for registration on the scheme.‎

“We followed a process that is intended to create awareness between what we have done before and what we are doing now.

“And, that will also make sure that we have sustained what we are doing on a long time basis.

“So there is a distinction between identity card management, when viewed from a process that enables you to identify the individual and to update the records of individual and the use to which you put that infrastructure,” he said.

He said that the identity card registration was “not time bound”.

According to Onyemenam‎, if you wake up today and go to any of our 404 enrollment centres, there will be somebody there to enroll you.

“There is a distinction between the process of enrolling legal resident, where we confirm that the person is legally resident and the process for enrolling a Nigerian who is a citizen.

“We require from you, reader document in this case, while the citizen enrollment can include even an attestation,” he said.

The director-general, therefore, said that an Immigration Service official was attached to every enrollment centre to certify legal resident Nigerians when they appear for registration.