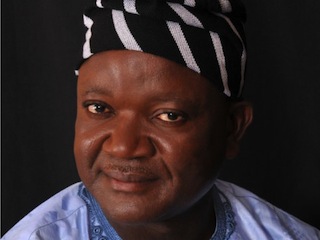 Dr Samuel Ortom, governorship candidate of the All Progressives Congress (APC) in Benue state, on Wednesday said he was ready to face any litigation against him by the ruling PDP.

Ortom decamped to the APC after losing the PDP governorship ticket to Terhemen Tarzoor in Dec 2014.

The Federal High Court Makurdi, on Wednesday ordered substituted service on Ortom in a case filed by the PDP challenging his eligibility to contest for governor under APC.

Ortom told newsmen at the premises of NKST Church in Makurdi, where he attended the ordination of some pastors, that he had not committed any crime to be scared of anybody.

The APC governorship candidate said as a law abiding citizen, he was available to be served any court order at any time.

He said he had briefed his lawyers on the matter and was prepared to face the PDP in court.

Ortom wondered why the PDP instituted legal action against him when he had already left the party.

He contended that the court case was instituted to divert his attention from his ongoing governorship campaign in the state.

The former Minister of State for Trade and Industry said the PDP was afraid of the massive support base of the APC in the state and was trying to distract him through litigations.