Indian couple to leave everything to pet monkey 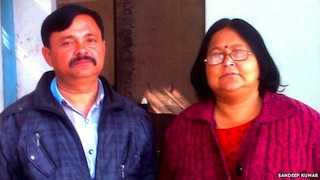 A wealthy Indian couple has made a pet monkey their sole heir, saying their lives became more prosperous after they adopted the animal and they want to ensure he is looked after.

Brajesh Srivastava and his wife Shabista have no children, but they view their pet monkey Chunmun as a son and have set up a trust to ensure the animal is looked after if it outlives them.

“People might say we are mad, they might even ridicule us. But we know how valuable Chunmun is to us,” Shabista, 45, told AFP.

“We are childless and Chunmun is a son to me. We want to ensure that even when we are not alive, Chunmun’s life is not affected and he continues to live the way he does.”

The couple, who were cast out after marrying against their family’s wishes, say they were poor when they adopted their monkey in 2004 but have since prospered.

They own the house where they live in Uttar Pradesh state in northern India, and they also have land and savings.

Shabista is a successful lawyer and her 48-year-old husband owns several businesses including a cable TV network and a flour mill — all named after Chunmun.

The monkey has his own air-conditioned room in the couple’s house, which he shares with his ‘wife’ — a female simian named Bitti who the couple has also taken in.

The two monkeys like to eat Chinese food and drink tea and mango juice according to Shabista, who even hosts an annual “wedding anniversary” party for the pair, inviting hundreds of friends to celebrate.

At 10, Chunmun may well outlive the couple — monkeys can live for between 35 and 40 years.

After his death, the money will go towards ensuring the welfare of monkeys in India, where the animals are frequently abused.