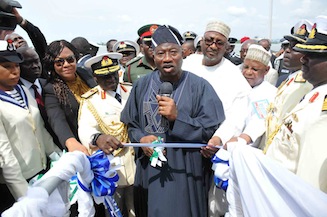 President Goodluck Jonathan said in Lagos on Thursday that the Federal Government was working hard to improve the capacity of the Armed Forces to fight insecurity.

The president said this at the inauguration of four Navy ships: Okpabana, Centenary, Sagbama and Prosperity; at the Naval Dockyard limited, Victoria Island, Lagos.

He said his administration would rout Boko Haram and conduct elections as scheduled by the Independent National Electoral Commission (INEC).

“So, Nigerians can see that the present administration is leaving no stone unturned to improve the capacity of our armed forces, not just the Navy but also the Army and the Air Force.

“We have built sufficient capacity. And let me also use this platform to promise good country men and women that we would rout Boko Haram.

“Our capacity has increased sufficiently and our officers and men are doing wonderfully well in the North.

“And we must conduct our elections as scheduled by INEC, because within this period we are convinced that we will return the North to the level where the activities of extremists will not affect our elections.

“They are working hard day and night and I directed that Nigerians should be briefed regularly.”

The president said that his administration placed much premium on national security in its drive to become one of the leading economies in the world.

“In line with my administration’s Transformation Agenda and our vision of becoming one of the leading economies in the world, premium is placed on improved national security.

“This includes food security as well as employment generation.

“The high dependence of the nation’s economy on offshore resources as well as the enormous potential of the maritime sector to contribute to our food security and employment generation make provision of effective maritime security very imperative.

“Therefore, the Nigerian Navy, as the lead maritime agency, deserves all the support it needs to effectively carry out its statutory roles.

“In this regard and in spite of other pressing demands, this administration has continued to support the fleet capitalisation objective of the Nigerian Navy transformation plan of 2010 to 2020, which was formulated to support the realisation of the goals of the Federal Government’s Transformation Agenda, especially in the security sector.

“The four ships being commissioned today are part of a total of six ships expected to be commissioned into the Nigerian Navy fleet by 2015.”

Jonathan further reaffirmed the administration’s confidence in the ability of the Nigerian Navy to fight oil theft and other maritime crimes.

According to him, the level of oil theft has not abated but vandalism of pipelines in the coastal regions has reduced drastically.

The president also commended the collaboration among the US, Peoples Republic of China and the Federal Government of Nigeria to fight insecurity, adding that his administration would not waiver in its support to the armed forces.

Earlier, the Chief of Naval Staff, Vice Admiral Usman Jubrin, said that in line with the Transformation Agenda of the Federal Government, the Nigerian Navy formulated its transformation plan from 2011 to 2020 with fleet capitalisation as its target.

He said that the Navy had been dogged by inadequate facility to contain the security challenges.

Jubrin, however, commended the Jonathan administration for its huge investment in security which he admitted was the highest by any administration.

The Naval chief said that additional eight small craft were expected to join the fleet before the end of 2015 in support of the naval efforts in ensuring maritime security.