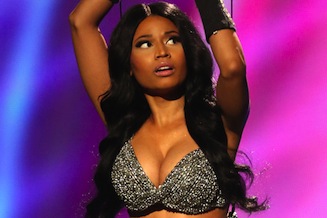 The tour manager of rapper Nicki Minaj was stabbed to death and another member of her entourage was seriously injured Wednesday in a bar fight, the artist and police said.

Minaj, one of the most successful female rappers, said that the two members of her team were stabbed in Philadelphia, where they were preparing for a tour scheduled to start on March 16 in Stockholm.

“One was killed. They had only been there for two days rehearsing for the tour,” Minaj wrote on Twitter.

Police said that an apparent argument set off the fight after midnight outside the Che’ Bar & Grill and that the victim had been stabbed multiple times in the torso before dying in a hospital.

The other man was in critical condition with stab wounds to his left arm and left side, a police statement said.

The police described the alleged assailant as a 30-year-old man with a full beard who drove away in a dark gold Buick Lesabre.

While police did not identify the victims, rapper Fabolous identified the dead man as De’Von Pickett, Minaj’s tour manager, and said that the other victim was associate Eric Parker.

“I am still in shock and don’t want to believe this. And it hurts even more knowing how good these two dudes are. How hard these guys work,” Fabolous wrote on Instagram.

Trinidadian-born, New York-raised Minaj has emerged in recent years as one of the most acclaimed women in hip-hop, a genre often notorious for its machismo.

Minaj has collaborated with superstars as diverse as Madonna and Justin Bieber. Her third studio album, “The Pinkprint,” was released last year and is full of autobiographical material, including a song about the trauma of a cousin’s violent death.

Minaj had been planning a one-month tour of Europe, where she will play major arenas.