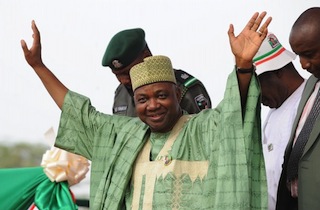 Vice-President Namadi Sambo on Wednesday led a Federal Government delegation to the 50th independence anniversary celebration of the Republic of The Gambia.

A statement issued in Abuja by the vice-president’s Senior Special Assistant on Media and Publicity, Malam Umar Sani, said Sambo was received at Banjul International Airport by Nigeria’s High Commissioner to The Gambia, Mrs Esther Audu.

The statement noted that the Minister of Youths and Sports of The Gambia, Aliyu Jammeh, was also at the airport to receive Sambo.

It stated that members of the delegation include Governor Gabriel Suswam of Benue and the Minister of Agriculture, Dr Akinwumi Adeshina.

It added that the vice-president, who arrived at the venue of the event at around 11:45 a.m., was received by the Gambian Vice President, Dr Aishatu Saidi, who led him to the dais for the Nigerian national anthem before taking his seat.

“The colorful ceremony which held at the Independence Stadium in Banjul, the Gambian capital, saw march past by military, paramilitary and other security institutions.

“The President of The Gambian Republic, Dr Yahya Jammeh, took the salute at about 1:30 p.m.”