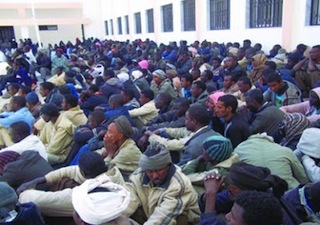 Addressing newsmen in Abeokuta yesterday, the State Comptroller of Immigration Service, Mrs Victoria Isang, disclosed that the feat was achieved due to the command’s zero tolerance for illegal entry into the country.

She revealed that those arrested were 29 Beninoise, 11 Nigerien and 10 Togolese and she promised that they would be repatriated back to their different countries within the next 24 hours.

Isang said that all the illegal immigrants were arrested at different locations in Odeda Local Government area of the state.

She said the Ogun Command had earlier on the February 6,2015 repatriated a total of 69 Togolese who were illegal immigrants.

Also in 2014, she said 147 illegal immigrants were repatriated by the Command.

She warned that foreigners in the state should steer clear from voting during the forthcoming elections, as anyone caught would be dealt with according to the laws of the land.

“Any foreigner who under false declaration is found in possession of the Permanent Voter Cards or Nigeria national identity card with a view to partaking in the election process shall be severely dealt with in accordance with the law.”