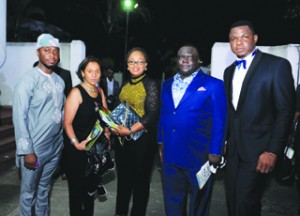 The British Council has named Bank of Industry (BoI) as the highest supporter of the creative industry in Nigeria.

The U.K. agency, during the fourth edition of its annual Creative Industry Awards, which took place recently, honoured stakeholders in the media, entertainment, fashion and business sectors in 21 categories.

Receiving the award on behalf of the Managing Director of the bank, Mr. Rasheed Olaoluwa, the Group Head, Creative Desk at BoI, Mrs. Uche Nwuka, thanked British Council for identifying with the creative sector and encouraging stakeholders through the reward system.

Nwuka, who disclosed that BoI has been working with some organisations, especially the British Council, in the areas of capacity training of stakeholders noted that the company had supported about eight different projects by giving them loans without collateral.

She cited Filmhouse Cinemas, G-Media distribution outfit, Silverbird Cinemas, Ozone Cinema, Viva Cinema, Flower Girl and Half of a Yellow Sun as some of the projects the bank has supported.

BoI is also helping to assuage, through its support for G-Media, a distribution run by notable film marketer, Igwe Gabriel Okoye, with online and physical structures across the six geo-political zones of the country.

The Creative Industries Awards is aimed at rewarding Initiatives, Talent, Creativity and Entrepreneurship within the creative industry, recognising the central role they play in the development of a competitive and sustainable creative economy.

During the awards, there were performances by Isaac Geralds, Cone ‘Aduke’, Afro-Soul Diva Aramide, Capital FEMI and Jaywon.