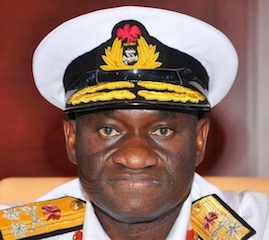 The Chief of Naval Staff, Vice-Admiral Usman Jibrin, on Friday called on officers and ratings to maintain a cordial civilian-military relations.

Jibrin made the call while addressing the officers at the Nigerian Navy Ship Quorra in Lagos.

He said that the members of Boko Haram sect were the country’s core enemy, adding that it was the duty of the military to protect civilians.

Jibrin said that the officers should always protect the good image of the Nigerian Navy with and without uniform.

He expressed appreciation with the officers for their efforts in protecting the country’s territorial waters, adding that their hard work had contributed to his effectiveness in office.

He also said that their fight against oil theft would continue until the Nigerian waters were totally safe from illegalities.