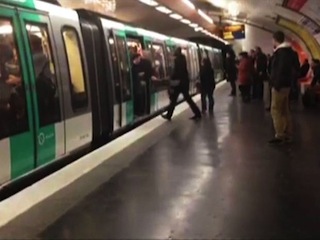 Chelsea “apologised unreservedly” on Friday to the black Frenchman racially abused by some of their fans on the Paris Metro.

The commuter, identified as Souleymane S, a French-Mauritanian, was repeatedly prevented from boarding a train by Chelsea supporters travelling to the Parc des Princes for the Champions League match against Paris St Germain on Tuesday.

“I’d like to make clear, on behalf of everyone at the club, our disgust at the incident. We were appalled by what we saw,” a club spokesman said before manager Jose Mourinho began his weekly press conference.

He added: “The club would also like to apologise unreservedly to Souleymane for the behaviour of a small number of individuals and their unforgivable action towards him.

“We’re writing to him to apologise and to invite him to come to a game as our guest.”

Three men could face life bans from football after being suspended from attending Stamford Bridge by Chelsea as part of the ongoing investigation into the incident.