Kevin Garnett back to Minnesota, where it all began 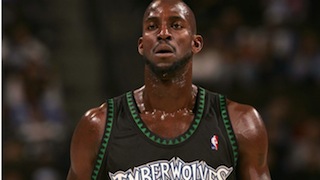 Kevin Garnett: back to his first love

Veteran Kevin Garnett is headed back to his first NBA home after waiving his no-trade clause with Brooklyn for a move to Minnesota at the league’s trade deadline on Thursday.

The move, confirmed by Garnett’s agent via Twitter, was among a spate of deals at the deadline, with Garnett headed to the Timberwolves in exchange for forward Thaddeus Young.

Garnett was taken by the Timberwolves with the fifth overall pick of the 1995 draft, coming right out of high school, and spent his first 12 NBA seasons in Minnesota.

Garnett, who will be 39 in May, was the face of the Timberwolves franchise, earning an All-Star berth 10 times and capturing NBA Most Valuable Player honors in the 2003-04 season.

However, the team made just one deep playoff run, reaching the conference finals during his MVP season, and the Wolves dealt Garnett to Boston before the 2007-08 campaign.

He helped the Celtics to the NBA championship in his first season and Boston also reached the NBA Finals in 2010, falling to the Los Angeles Lakers.

Now in his second season with Brooklyn, Garnett was averaging 6.8 points and 6.8 rebounds in 42 games.

Garnett could provide valuable leadership for a young Timberwolves team now languishing in last place in the Western Conference with a record of 11-42.

“He put the Minnesota Timberwolves all around the world,” said Minnesota’s Spanish guard Ricky Rubio. “Even when I was in Europe and in Spain, I knew (about Minnesota) because KG was here.

“It’s an honor to play with him and have him in the locker room.”

Among other deals at Thursday’s trade deadline, the Portland Trail Blazers acquired swingman Arron Afflalo in a five-player swap with Denver.

Afflalo is a career 38.4 percent shooter from three-point range who will help spell Wesley Matthews and Nicolas Batum, both of whom are averaging 34 minutes per game for the Northwest Division-leading Trail Blazers.

Oklahoma City, locked in a tight race with Phoenix and New Orleans for the final playoff spot in the Western Conference, acquired Enes Kanter and point guard D.J. Augustin and two other players in a three-team deal that also involved Utah and Detroit.

The Thunder received Kanter and three-point specialist Steve Novak from the Jazz and got Augustin and forward Kyle Singler from Detroit.

Kanter, the third overall pick in the 2011 NBA Draft, was due to become a restricted free agent at the end of the season and recently requested a trade.

They also got swingman John Salmons, who will be waived, from New Orleans, who got guard Norris Cole, forward Shawne Williams and center Justin Hamilton from Miami.

In another three-team deal, Milwaukee acquired reigning Rookie of the Year Michael Carter-Williams from Philadelphia and guard Tyler Ennis and center Miles Plumlee from Phoenix. Milwaukee shipped Brandon Knight and Kendall Marshall to the Suns.

In a corresponding roster move, the Bucks requested waivers on forward Kenyon Martin.