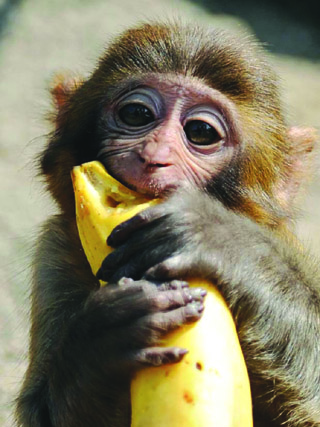 A childless couple in India has decided to bequeath their entire property – house, land and bank deposits – to their pet monkey.

Sabista and Brijesh Srivastava, residents of Rae Bareli in Uttar Pradesh state, have set up a trust that would oversee their property after their death and its main beneficiary would be their monkey Chunmun, the Asian Age newspaper reported today.

The couple was in the process of selecting wildlife enthusiasts as members of the Chunmun Trust, which would look after the welfare of monkeys in India, Asian Age and NDTV news channel reported.

Sabista Srivastava said she got her first monkey Tintin from a neighbour who was maltreating the animal and, when she objected, sold it to her.

The Srivastavas bought Chunmun in 2005 and brought him up in luxury. His room has an air-conditioner for the summer and a heater in winter.

In 2010, Chunmun was married to Bitti, a female monkey. Every year, on the monkeys’ wedding anniversary, the Srivastavas host a dinner for about 1000 people and feed wild monkeys in the neighbourhood.

“Ever since Tintin and Chunmun came into our lives, we have prospered and we feel it is due to them,” Sabista Srivastava, a laywer, was quoted as saying by Asian Age.

“They are our children and it is our duty to ensure that they are well looked after even when we are gone.”