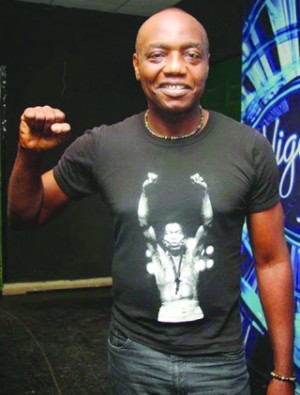 Afro Beatstar and Nigerian Idol Season 5 Judge, Dede Mabiaku has described the just concluded auditions of the on-going edition of the reality music show as a significant improvement on the immediate past edition won by Evelle.

“It has been incredible. It has been lovely. It has been an improvement on season 4. It has been amazing because when you get a good feeling from something then there is joy in doing it,” stated Dede who is a judge on the show alongside Dare ‘Art’ Alade and Yinka Davies.

Dede is popular on the show for his preference for originality, Nigerian culture and candid views on contestants’ talents and performances.

Interestingly, he appeared not to have forgotten these qualities as he occasionally took on some of the contestants on their performances, occasionally creating suspense.

“These children were sent to us. In my point of view, they have come in here saying they want to become Nigerian Idol.  My own thinking is that they should be better people for the fact that they have met me. So, I will rather help them, but if it is impossible to help any person, I hack,” he added.

Optima Media Group, OMG,  Nigerian Idol franchise owners, concluded the nationwide auditions between 10 January and 9 February under the supervision of the celebrity judges alongside show presenter and OAP, Ill Rhymz.

The auditions presented windows of opportunities for first-hand assessment of the thousands of youths with music talents who had thronged the respective venues to compete for places in the next phase of the competition.

Nigerian Idol Season Five is sponsored by leading telecommunications operator, Etisalat, Dabur toothpaste and E-Commerce platform, Payporte and will feature such enthralling performances which were the hallmarks of past winners among whom are Yeka Onka, Mercy Chinwo, Moses Adigwe and Zibili Evelyn who goes by the stage name Evelle.