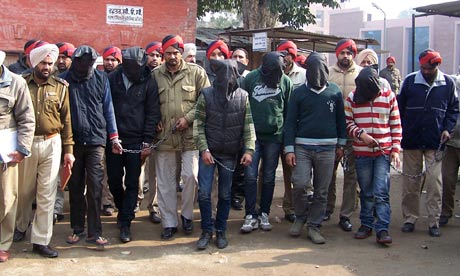 Police in Delhi arrested four men on Friday in connection with the alleged gang-rape of a Nigerian woman in a moving car, the latest in a series of sex attacks in the Indian capital.

The 35-year-old, who has been staying in India on a tourist visa, told police the men kidnapped her after midnight on Friday morning outside a popular shopping mall in New Delhi’s Saket area before bundling her into a car.

They then drove for around half an hour, during which time the alleged gang-rape took place, before pushing her out of the vehicle.

The woman, who cannot be named, was finally rescued after a passerby spotted her on the side of the road in Mayur Vihar, around 20 kilometres (12 miles) away in east Delhi.

“We have received a complaint from the woman and investigations are ongoing,” Delhi police spokesman Rajan Bhagat told AFP.

“We have filed a case under relevant sections.”

Bhagat said the four men arrested were Indians, and the car allegedly used had been impounded.

Local media, quoting police sources, said the victim was in an inebriated condition at the time of her rescue and had suffered minor injuries but was released from hospital by Friday afternoon.

Nigerian embassy officials in New Delhi were not available for comment.

The city sealed its reputation as India’s “rape capital” two years ago when a medical student died after being gang-raped on a moving bus, prompting mass protests and triggering a series of policing and legal reforms.

Last year, a driver for US-based online taxi service Uber allegedly sexually assaulted a woman passenger in New Delhi while driving her home from a dinner.

Police figures released earlier this year said 2,069 rape cases were registered in New Delhi during 2014, a 31 percent jump compared to the previous year.