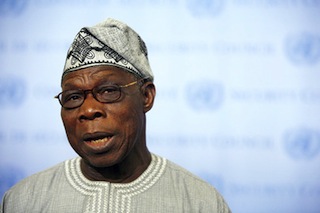 The Vice Chairman of Delta State Traditional Rulers’ Council, His Royal Majesty, Dr. Emmanuel Efeizomor II‎, has berated the recent outburst of former President Olusegun Obasanjo over his decision to leave the Peoples Democratic Party (PDP), describing it as an attempt to destroy democracy.

Dr. Efeizomor who is the Obi of Owa Kingdom in Ika North-East Local Government Area of the State, said the former President’s action could be interpreted in different ways, adding that, the action goes to show the quality of leaders that have ruled the country.

“It is good that Obasanjo has destroyed his membership card in public and it tells you what makes up the quality of those who have ruled Nigeria. And it tells you why Nigeria has not grown because as a leader at that time, I had a lot of respect for him, I cherished him and have visited him times without number.

“It is like picking up the Bible or Koran and destroying it. Our former leader has picked up democracy and tore it. Democracy that brought him from prison and gave him freedom, gave him opportunity to rule Nigeria for eight years excluding his military regime.

“Then at the end of it, at the foot of election, you tear democracy. In other words, he staged a coup against democracy. He sentenced democracy into oblivion. He terminated democracy,” he stated.