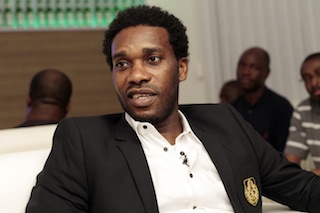 At the elections conducted in Asaba on Friday, and supervised by a member of the NFF Executive Committee, Alhaji Babagana Kalli, Okocha polled 26 out of the 27 votes cast.

One of only two Nigerian footballers to play at three FIFA World Cup finals, Okocha’s club career took him through Germany, France, England and Turkey, and he is presently Head of the NFF Technical Study Group.

Okocha, who had served as vice chairman, replaces Amaju Pinnick, who announced his intention to relinquish the post on the same day he was elected President of Nigeria Football Federation, 30 September, 2014.

Meanwhile, Chris Green, a member of the NFF Executive Committee and chairman of the NFF Disciplinary Committee, was elected Rivers FA Chairman on Thursday after polling 14 out of the 17 votes cast at the elections monitored by Chairman of the NFF State Elections Monitoring Committee, Alhaji Ibrahim Musa Gusau. His opponent, China Acheru got two votes, while one vote was declared invalid.

In Abeokuta, incumbent Alhaji Ganiyu Majekodunmi and his entire executive board got 20 ‘yes’ voice votes to retain their seats, at a congress declared open by the Ogun State Director of Sports, Mr. Sola Faleti.

The chairman of the Abeokuta local council football body, who said he has sent a protest letter to the NFF, was the only person out of the eligible 21 delegates that did not vote, at an election supervised by Yusuf Ahmed Fresh, member of the NFF Executive Committee and chairman of the NFF Referees Committee.