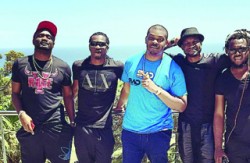 The music stars and producer were in South Africa for the shooting of the video for P-Square’s highly rated song Collabo featuring Don Jazzy.

To create awareness for their new work, music director and P-Square’s brother, Jude Okoye has been sending appraisals to Don Jazzy since their arrival in Cape Town.

P.M.NEWS Entertainment Café gathered that the crew is also using the opportunity to record more songs.