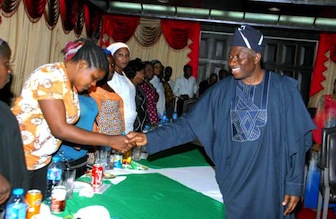 President Jonathan meeting with a group of market women at the State House, Lagos

President Goodluck Jonathan said on Friday in Lagos that victory for the Peoples Democratic Party (PDP) in the upcoming general elections would free Lagos residents from oppression.

He stated this when the leaders of market women groups, “Iyalojas”, in Lagos and environs, paid him a solidarity visit at the State House, Marina, Lagos.

Jonathan, who was reacting to the complaint of high-handedness and witch-hunting made by the market women against the All Progressives Congress (APC)-led Lagos state government.

He told the market women, and indeed, all traders in the country that the PDP administration would provide the enabling environment for them to ply their trades.

“Our victory at the polls will free all Lagos traders from oppression. You need to be free; we will remove Lagos from bondage,” he assured.

He commended the women for supporting his re-election bid and urged them not to be intimidated by their opponents.

“Thank you for working hard for PDP; this is the final struggle and time for us to use all our strength to achieve victory,” he said, adding that, the country belonged to every Nigerian.

“If we struggle and win Lagos state, everybody will do his business without being harassed or intimidated,” the president added.

Earlier, the leader of the market women, Hajia Aminat Hussein, had told the president that they had stood behind PDP since its inception but regretted that the members suffered harassment under in Lagos state.

She said that in spite of the attempts by APC “to buy over many of the market women”, the women would mobilise themselves in the state and in other states to ensure victory for the president.

“We are promising you that you will not lose in Lagos; this coming election is for Goodluck Ebele Jonathan and God is with you,” she added.

Sen. Musiliu Obanikoro, former Minister of State for Defence, who accompanied the group, told the president that the group was working to tell the world that the ruling party in Lagos “are not untouchables”.

“These women are more concerned about the reality than news in the social media. APC will be shocked on Election Day; we believe in our president.

“I do not know of any president that is as humble as Jonathan. If you have such a man as president your interest will be protected,” Obanikoro said.

He said that the North had served as president for so many times, and that the West had taken its turn “and the only president elected from South-South which provides the country with its wealth, should be allowed to complete his tenure”.