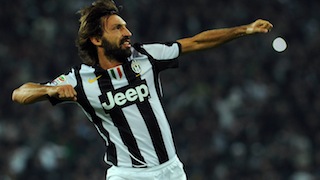 Juventus warmed up for their Champions League last-16 clash against Borussia Dortmund next week with a come-from-behind 2-1 victory over relegation-threatened Atalanta in Turin on Friday.

In a Serie A clash moved forward to Friday night, Juventus extended their lead at the top of the table to 10 points over idle Roma with the capital side not in action until Sunday when they travel to Verona.

The victory also maintained Juventus’ unbeaten run at home this season, and extended their run without loss in all competitions at the Juventus Stadium to 31.

Fernando Llorente and Andrea Pirlo got the goals for the hosts after the visitors had taken an early lead through Guilio Migliaccio.

Atalanta took a shock lead against the run of play when they won a corner on the right on 25 minutes that was superbly delivered by former Dutch international Urby Emanuelson.

A near post cross was met by a glancing header from Migliaccio whose decisive touch bounced off the far post and behind the startled Gianluigi Buffon for only the seventh goal conceded by Juventus all season at their home ground.

It was Migliaccio’s first league goal of the season.

Roberto Peyeyra almost equalised immediately following the restart when set up by Argentine Carlos Tevez but his close range shot was deflected behind by the legs of Atalanta ‘keeper Marco Sportiello.

However, constant pressure from Massimiliano Allegri’s league leaders paid off six minutes before half-time when they levelled the match.

A corner from the right led to a scramble inside the six-yard box and Llorente stabbed the ball over the line for his fifth goal of the season.

Juventus then took the lead moments later thanks to a stroke of brilliance from Pirlo, who sent a powerful swerving shot from 35 yards past the despairing dive of Sportiello just before half-time.

It was harsh on the visitors who had battled gamely but Pirlo’s strike was unstoppable, his third of the league campaign, and another example of why he remains one of the best midfielders in the game.

The rest of the match remained scoreless as Juventus protected their advantage and gave themselves the ideal preparation ahead of the arrival of Dortmund next Tuesday.