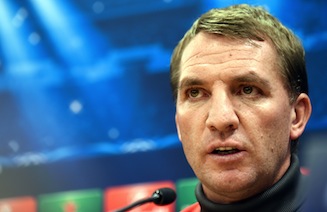 Reds captain Steven Gerrard was angry that Balotelli overruled Jordan Henderson when the stand-in Reds skipper tried to take an 85th-minute penalty in the last 32, first leg at Anfield on Thursday.

With the game goalless, Jordon Ibe won the spot-kick and England international Henderson appeared set to fulfil his role as the assigned penalty taker in the absence of the injured Gerrard.

But Balotelli took the ball out of Henderson’s hands, prompting an exchange of words with the Liverpool midfielder before a visibly irritated Reds striker Daniel Sturridge arrived on the scene to protest on Henderson’s behalf.

Ignoring their complaints, Balotelli, who has endured a difficult time at Liverpool since his move from AC Milan last year, didn’t seem bothered by the fuss as he deliberately stutter-stepped in his run-up before coolly stroking home the spot-kick.

And, although he has had his own issues with Balotelli, on this occasion Rodgers insisted the forward had done nothing wrong because he was following the established penalty order agreed earlier in the season.

“There has probably been a lot more of a drama been made out of it than it actually was,” Rodgers said.

“With the players who were initially on the pitch last night Jordan was our nominated taker.

“History shows he (Balotelli) has scored nearly 30 penalties in big games so he is an outstanding penalty-taker, but none of them were on (at the start) so you have to nominate someone.

“Jordan was happy enough to take it but he gave it to Mario.”