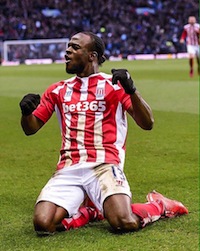 Sherwood was in charge for the first time following his appointment as successor to the sacked Paul Lambert, but the former Tottenham Hotspur boss was unable to spark an immediate improvement in his struggling team’s fortunes.

The hosts had taken the lead through Scott Sinclair’s first-half goal, but Mame Diouf equalised just before the break and Victor Moses ensured Sherwood’s debut would end in frustration when he converted a penalty three minutes into stoppage time after Villa defender Ron Vlaar was sent off.

The dispiriting defeat dropped Villa to second bottom of the Premier League and left them without a win in 11 league games after a woeful run of six successive defeats.

Sherwood’s decision to head down from the stands and deliver a half-time team-talk, even though he hadn’t officially taken charge at the time, had inspired an FA Cup fifth-round win over Leicester City last weekend.

He was greeted warmly by the Villa faithful as he took his seat on the bench before kick-off after naming an attacking line-up featuring Gabriel Agbonlahor, Christian Benteke and Sinclair.

Villa seemed energised by Sherwood’s presence and took the lead in the 20th minute when Fabian Delph’s cross picked out Sinclair, who rose to glance a header into the top corner for his first Premier League goal since August 2012.

It was a second goal in successive appearances for Sinclair, signed on loan from Manchester City by the much-maligned Lambert, after he also netted in the Cup win over Leicester and his latest effort prompted a fist-jumping jig of delight from Sherwood on the touchline.

But Mark Hughes was furious after Stoke’s FA Cup fifth-round thrashing at second-tier Blackburn Rovers last weekend and his players mounted a strong response to get back in favour with their manager.

Moses tested Villa goalkeeper Brad Guzan with a stinging drive and their pressure was rewarded when Senegal forward Diouf equalised on the stroke of half-time with a powerful header from Stephen Ireland’s cross.

Sinclair’s goal had been Villa’s only shot on target in the first half and Sherwood didn’t take long to make a change after a lethargic start to the second period.

Austrian forward Andreas Weimann was sent on to replace Carles Gil, but it was Stoke who won in dramatic fashion.

Vlaar’s poor touch allowed Moses to steal the ball and burst into the area, where he was hacked down by the Villa defender.

That brought a red card for Vlaar and Nigerian winger Moses added insult to injury as he slotted home the spot-kick.