Watch out: Deadly 'thogotovirus' discovered in US 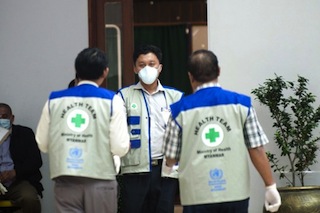 US health authorities on Friday announced the discovery of a new virus believed to be responsible for the death of a previously healthy man in Kansas last year.

The virus — named “Bourbon” after the county where the victim lived — is part of a group of viruses known as thogotovirus, the Centers for Disease Control and Prevention said in a statement.

It is the first time a virus from the family has caused a human fatality in the United States, and only the eighth known case of a thogotovirus causing symptoms in people, the CDC said.

Thogotoviruses have been linked to ticks or mosquitoes in Europe, Asia and Africa and officials said the Bourbon virus may also have been spread the same way.

The victim in Kansas, described as a man in his 50s, had been bitten by ticks multiple times in the days before falling ill, the CDC said. The infection was the only known case, he said.

The discovery of the case came after tests for several other infectious diseases proved negative, prompting further analysis of a blood sample by a CDC laboratory.

Researchers using advanced molecular detection technology were able to determine that the man died from a new virus.

Doctors who treated the man found a tick full of blood on his shoulder. He fell ill suffering from a headache and a fever, according to a study published in the CDC’s Emerging Infectious Diseases journal.

The man was treated with antibiotics but his condition worsened leading to kidney failure and an inability to breathe without assistance. He died 11 days after the onset of symptoms.