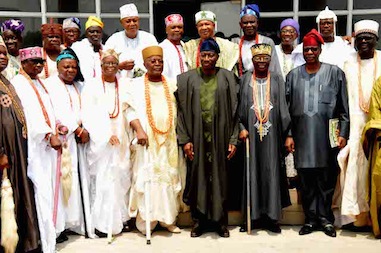 At the sidelines of the commissioning of the Olorunsogo Power Plant in Ogun State Friday, President Goodluck Jonathan held a short meeting with some traditional rulers from the state.

Feelers from the meeting said several monarchs raised the various attacks on the former Nigerian President,Chief Olusegun Obasanjo, after he announced his departure from the Peoples Democratic Party.

The Ogun monarchs told the President to caution his aides to cease further media attacks on Obasanjo.

One monarch frowned at the impromptu meeting, which he regarded a disrespect to the royal class. “We must be respected because we are not politicians and cannot just be summoned into a meeting without prior notice. Also, we down here always respect elders, we don’t say because of politics, one will not know his elders.”

After the meeting, the monarchs tried to show their displeasure when some of them reluctantly took photographs with President Jonathan.

President Jonathan while at the meeting canvassed for support for his re- election and that of other PDP candidates in the state.

Also, it was gathered that the governorship candidate in the state, Prince Gboyega Nasir Isiaka, strongly appealed to the monarchs to support his candidature as he promised to improve their welfare package if elected into the office.

President Goodluck Jonathan at the commissioning had commended the people of the state for creating an enabling environment for the project, which was started by the Obasanjo administration.

“I must commend all our people from Ogun state especially, people from the catchment areas, the trading leaders, the youth leaders, the women leaders for creating the enabling environment for this project to go on to this level that we are here today commissioning. This is your project and we shall expect your continued cooperation in safeguarding it.

“With the support we are getting from our traditional rulers, religious and youth leaders, community and women leaders, we will get to where we want to go. I am pleased that I have lived up to my campaign pledges to make power sector reform a priority and a reality.

“This agenda has ushered in new capital investment and would continue to boost more investment opportunities for the private sector players, widening the horizon of our transformation agenda through the multiplier effects.

“I urge you all to support the federal government. This is the way we can improve electricity services to the entire country,” Jonathan said.