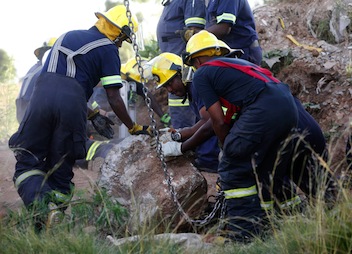 South Africa rescue workers getting a miner out of a trap

Eighteen workers were still unaccounted for Sunday following a fire at a South African mine that had trapped nearly 500 workers underground, a spokeswoman for mining company Harmony Gold said.

“About 459 miners have been brought to the surface or are busy being brought to surface,” Charmane Russell told AFP. “Eighteen are currently unaccounted for.”

According to a company statement, the fire at the mine near Carletonville about an hour from Johannesburg, broke out around 0740 GMT, nearly two kilometres (1.25 miles) underground.

Harmony Gold said 486 miners were working in the Kusasalethu mine at the time.

The fire is believed to have while maintenance work was being carried out on an air cooler.

“The fire has now been contained,” the company said in a statement late Sunday.

“All operations at the mine, other than those related to the rescue have been suspended.”

South Africa’s economy is heavily dependent on the mining of copper, gold and platinum.