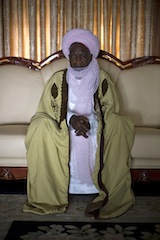 The Emir of Mubi, Alhaji Abubakar Isa-Ahmadu, has called on persons displaced from his domain by Boko Haram insurgents to return home.

The statement quoted the Emir as saying this when he received a Federal Government delegation led by the Minister of Youths Development, Mr Boni Haruna, in his palace.

The Emir called on the resident of the community to give the necessary cooperation to NEMA personnel in their efforts to assess the level of damage caused by the insurgents in Mubi.

Isa-Ahmadu called on the people of Mubi to be vigilant, law abiding and assist the federal government toward maintaining peace and security in the area.

The Emir thanked President Goodluck Jonathan for his concern towards the condition of the displaced persons.

Haruna had told the Emir that the delegation was in Mubi to assess the level of peace and security in the area.

“The commander of the Battalion based in Mubi has assured that soldiers have cleared the town and made it safe for law-abiding citizens to return home,’’ the minister said.

Also, Mr Musa Zakari, leader of the NEMA team, said they would conduct thorough assessment of the level of damage in the town and recommend to government on appropriate support to victims.