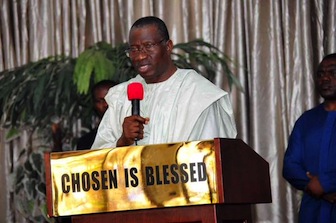 Nigerian President Goodluck Jonathan said he underestimated Boko Haram Islamists who have overrun swathes of the country’s northeast and defended an election postponement in an interview published by Thisday on Sunday.

Jonathan, facing a tight re-election bid against ex-military ruler Muhammadu Buhari, has faced criticism over the vote delay, which critics argue was designed to give him time to shore up his campaign.

The military pushed for the six-week delay eventually granted by the electoral commission to allow it to secure the country for the vote, though Boko Haram’s insurgency has raged for six years.

Presidential and parliamentary elections are now set for March 28.

“Probably at the beginning, we, and I mean myself and the team, we underrated the capacity of Boko Haram,” Jonathan said in an interview with influential newspaper ThisDay.

He said that the military has recently acquired more arms and ammunition to do battle with the Islamists, vowing that their suppression and the capture of the group’s leader were near.

“God willing, we will catch (Abubakar) Shekau before the elections,” he said.

Asked why six more weeks would make a difference in the years-long conflict that has killed more than 13,000 people, Jonathan said the military could make reasonable progress in that time.

“We are not saying we must finish Boko Haram to conduct elections, but we should get to a point where they will not cause havoc if they make an attempt,” he said in the interview.

“My belief is that by 28th of next month, when the elections will be conducted, Boko Haram may not even be in a position to attack any town, God willing.”

Nigeria’s military authorities on Saturday claimed to have recaptured the fishing town of Baga from the Islamists, more than a month after it was overrun in what is feared to be the worst massacre of the six-year insurgency.

There was no independent corroboration of the claim, as thousands of Baga residents had fled the town after Boko Haram attacked on January 3 and hundreds, if not more, were killed in the following days.

Over one million people have been left homeless since 2009 as the rebels try to carve out an Islamic state in northeastern Nigeria.

The Islamists have recently extended their violent campaign into nations neighbouring Nigeria’s northeast as regional forces pursue them.