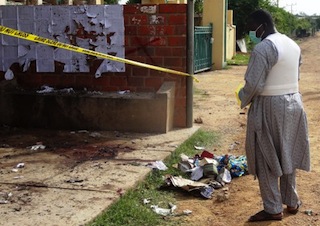 File Photo:
A police detective inspects the site of a suicide blast

“The lady refused to be checked at the gate to the market and an argument ensued,” witness Ibrahim Maishago told Reuters by telephone.

“She let off the bomb, killing herself and five others, while many were injured.”

A hospital source speaking on condition of anonymity confirmed the toll of the dead and the wounded.

It was the second such suicide attack around the same market, where new and second-hand phones are sold and repaired.

The first attack occurred January 11, when two suicide bombers, one of them appearing to be around 15 years old, blew themselves up outside the market. The attack killed six and injured 37 others.