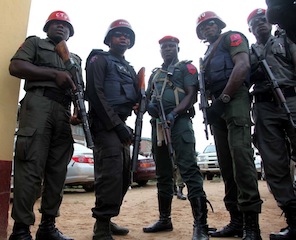 Three suspected armed robbers were killed on Sunday by men of the Special Anti-Robbery Squad (SARS) in Ogun state following a gun duel with the robbers at their hideout in Atan-Onibukun community of Ado-Odo/Ota local government area of the State.

Two of the robbers were arrested by the squad while others escaped with bullets wound.

In a statement signed and release Sunday afternoon by the State Police Public Relations Officer, PPRO, Deputy Superintendent of Police, DSP Olumuyiwa Adejobi in Abeokuta, the deadly armed robbers had been terrorising members of the communities before they met their waterloo.

“SARS has been on the trail of the robbers for almost a month before it swooped on their den, and they (robbers) fought back, but in the gun battle that followed, three of the robbers fell while two were arrested with arms but others escaped with bullet wounds.

“The operatives have been on surveillance of the den for almost a month before they embarked on the successful operation with the help of some members of the public who assisted in gathering information on the area. The deadly and notorious armed robbers, on sighting the SARS operatives, opened fire on the police operatives but they repelled them (robbers) fire for fire. Three of them were left dead, two were arrested while others escaped with fatal bullet wounds.

He noted that: “the injured suspected armed robbers are receiving treatment at an undisclosed hospital with a view to assisting us in our investigation on the matter. The command therefore appeals to the general public particularly medical practitioners to be on the look-out for any patients with suspected bullet wounds and endeavour to notify the Ogun State Police Command or any Police formation around them of such for necessary action,” Adejobi explained.

It was further stated that the members of the affected communities and their neighbours in the area have expressed confidence in the police for coming to their aid and also commended them for the achievement and ability to sustain good security networking in the state at large.

Adejobi however revealed that the new Commissioner of Police in the State, CP Valentine Ntomchukwu who resumed work last Wednesday read a riot act on robbers and others who engage in illegal activities in the state.

The new CP has also directed thorough investigation into the activities of the robbers in the area and the state in general, in order to assist the police in combating crime.

He disclosed that the Commissioner, who was transferred from Bayelsa state assured the good people of the state, during his maiden address, of adequate security of lives and property and enhanced community-based and effective policing.