INEC Opens Up on 'Alien' PVCs in Ogun 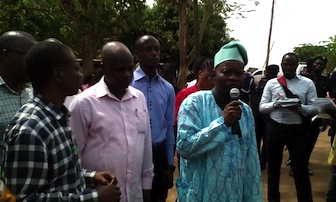 The Independent National Electoral Commission (INEC) in Ogun state have given details of the “alien” Permanent Voter Cards that were said to have been brought to the state by Governor Ibikunle Amosun.

It would be recalled that last week Amosun accused the commission of bringing over 600,000 PVCs whose owners were not resident in any part of the state. The governor maintained that the commission was out to disenfranchise many residents of the state from participating in the forthcoming general elections.

Addressing members of the Committee for the Defence of Human Rights (CDHR) Ogun State chapter who staged a peaceful protest to the INEC office in Magbon area, along IBB Boulevard, Oke Mosan, Abeokuta Monday morning, the Administrative Secretary of the Commission, Dickson Atiba explained that the cards are not aliens but for those who were residing in the state during the 2011 election but has since relocated.

“There are no alien cards in Ogun state. Those cards that the governor was referring to alien cards are meant for the state. Ogun state has the largest number of institutions and some students who were here before and have completed their studies and some security personnel’s who have been transferred out of the state have their cards lying fallow with us here, who will collect it on their behalf?.

“As at the time the governor was here last week, the number was around 600, 000 plus but as we are speaking now, the number has reduced to 573,236. These numbers are those that are yet to be collected and we are not sleeping over it. We even received about 21 cards meant for Edo state and we have since returned them.

“I have instructed all the electoral officers across the state to forward the names of those that have not come to pick their cards and we will compile them and paste them at every local government area. This will hasten people to check their names and once it is there, their cards will be given to them without much stress,” Atiba narrated.

He however promised that all the remaining voter cards meant for the people of the state will be delivered before the end of this month.

Atiba revealed that Ogun state has 1,795794 voters, and the commission had so far received 1,368,875 voter cards with 795,962 distributed which amounted to 56.7 per cent but on the basis of total voters number, the percentage will be about 44 per cent.

The CHDR marched from Kuto roundabout to the office of the INEC protesting the lackadaisical attitude of the commission towards the distribution of the PVCs in the state.

The human right group marched with placards reading various inscriptions like; “INEC, Give us our PVCs or face the wrath”; “Jega release Ogun PVCs”; “Don’t destroy democracy,release our PVCs”; “On March 28, April 11, we stand”; “Jega ,don’t deny us our voting right” among others.

Speaking earlier, the CDHR Chairman in the state, Comrade Yinka Folarin declared that they have no confidence in the Prof. Attahiru Jega led INEC to conduct free, fair and credible election in the country.

He said they are out to exercise and agitate the right of the good people of the state and as well reject what they referred to as ‘fabricated figures’ given to some states under insurgency threat.

“We have come to INEC office to exercise and agitate our right. We have come to ask INEC what is the sin of our people that it didn’t release our PVCs and to express our displeasure over the satanic agenda of Jega to disenfranchise the good people of Ogun state,” he said.