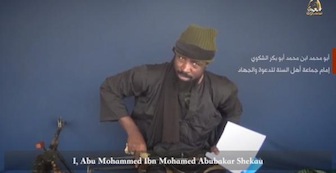 The APC Presidential Campaign Organization (APCPCO) has raised the alarm about reports of a fake Abubakar Shekau (Boko Haram leader) that will be presented before Nigerians by the federal government in order to claim glory for winning the war on terrorism.

In a statement issued by the Director of Media and Publicity of the APCOPC signed by Malam Garba Shehu, APC campaign organisation wondered where the ‘new Shekau’ will come from after government at several times in the past, announced that they had killed the insurgent leader.

Beyond this, credible sources have alerted the APC that the fake Shekau might become a tool to blackmail members of the opposition by coaching the phantom terror chief to say he was working for the opposition party candidate, General Muhammadu Buhari in order to link its presidential candidate to terrorism as it had attempted but failed in the past.

“The charge to the military, that they should catch Shekau alive by President Goodluck Jonathan in the last 24 hours lends credence to the report that indeed a fake Shekau is about being created.”

The APCPCO recalled that the attack back in Kaduna on the party’s presidential candidate, General Muhammadu Buhari was seen and believed by most Nigerians that it was perpetrated by the Boko Haram. “The police that is constitutionally empowered to investigate and report on such incidents has not contradicted the widespread belief that this was a Boko Haram attack.”The view of the APC is that it does not make sense for General Muhammadu Buhari to be in league with, or be associated in any way with people who have set out to kill him.”

In the view of this, the APCPCO said the government needs to listen to the various counsel from international bodies and lately by our religious leaders that campaign must be about issues and not maligning people. “Unfounded allegations linking the opposition to insurgency amounts to leaving the issues to pursue personal attacks as warned against, barely 24 hours ago by leaders of the Catholic Community in the country, through Arch. Bishop John Onaiyekan.

The APC presidential campaign said it was no less shocked, as other Nigerians by the President’s admission in a weekend newspaper interview that he has under-estimated the Boko Haram challenge, arguing that any leader in that circumstance should not consider himself fit to seek re-election.

Quoting President Jonathan’s recent confession that he under-estimated Boko Haram, the APC presidential campaign said the admission was a direct evidence that the PDP President has nothing to offer and must bow to the wind of change.

According to the statement, President Jonathan is out of touch with the realities of the lethal challenges posed by global terrorism, including Boko Haram, which is affiliated to Al-Qaeda global terror network.

Malam Garba Shehu explained that for any President to under-estimate terrorism, it means that he doesn’t take any national challenges seriously, including health, poverty, unemployment, power, education, infrastructure and other issues.

The APC presidential campaign added that with his admission, President Jonathan has passed a vote of no confidence on himself and his government.

The statement added, however, that APC presidential campaign was not surprised by the self-confessed failure by the PDP President, explaining that his confession underlines the imperative for change.

Shehu said that with a President admitting his incompetence of a mortal challenge to the security of Nigerians, he has no business seeking re-election or looking for excuses to delay the polls.