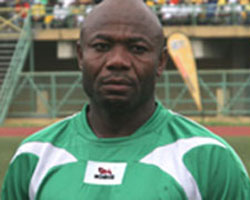 Amunike, who attributed his Golden Eaglets’ qualification for the FIFA Under-17 World Cup in Chile to determination, team work and self belief said: “I don’t fear any team or prefer to meet any. Our major concern now is to make sure the boys are refreshed and ready for the semi-finals.”

“Despite our qualifications, there are areas we need to still work on and players to get back to full fitness from the knocks they suffered in the group stages.

“If you want to win the cup, you have to beat the team in front of you. That is the only way to become champions. We are not afraid of anybody, but we also respect our opponents,” he added.

Amunike also reiterated that his team is still evolving and more work has to be done to get the team in a much better shape when the knock out stages commences.

Meanwhile, gangling Golden Eaglets striker, Victor Osimhen, has admitted it would be an effort in futility if he emerges as Niger 2015 top scorer without Golden Eaglets as champions of Africa.

On the road to Niger 2015, Osimhen was Golden Eaglets’ top marksman with an impressive 18 goals in 38 (official and friendly) matches, and has scored thrice in Niger, including  two spectacular strikes against Zambia on Saturday.

“We are  happy  that we have qualified  for the World Cup, the priority now is to ensure we win the trophy because it would be meaningless even if I finish the top scorer,” Osimhen said.