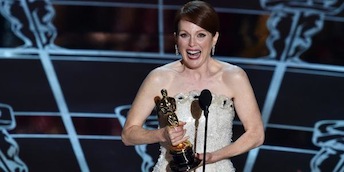 Julianne Moore, 54, clinches onto her Academy Award in disbelief

Julianne Moore, who won the best actress Oscar on Sunday, was a late-bloomer who turned 30 before she hit the big screen — but has more than made up for it ever since.

The win came on her fifth Oscar nomination, and is the crown jewel in a career already rewarded with three Golden Globes — including one for “Still Alice” last month — a Primetime Emmy and a BAFTA, also for her latest film.

“I read an article that said that winning an Oscar could lead to living five years longer. If that’s true, I’d really like to thank the Academy, because my husband is younger than me,” Moore quipped as she accepted her award.

She also said she was “thrilled” to be able to shine a light on those suffering from Alzheimer’s, noting that “so many people with this disease feel isolated and marginalized.”

Here is the complete list of winners at the 87th Academy Awards on Sunday:

Best actor: Eddie Redmayne, “The Theory of Everything”