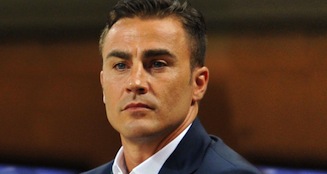 Former world player of the year Fabio Cannavaro faces a tough start to his managerial career when he leads 2013 winners Guangzhou Evergrande into the AFC Champions League this week.

Glittering honours as a player do not guarantee success in the dug-out and World Cup-winner Cannavaro, 41, is taking the plunge at a club where expectations are sky-high.

Four Chinese titles in a row, plus China’s first Champions League win, add up to a tough act to follow as Cannavaro takes over from his former Italy boss Marcello Lippi.

However Lippi remains involved as director of football and he will be well placed to closely mentor Cannavaro, his captain when Italy won the 2006 World Cup.

The South Korean club thrashed Hanoi T&T 7-0 in the play-offs and they will be eyeing revenge for the 2013 final, when they missed out to well-heeled Guangzhou.

The southern club has been on another spending spree in the close season, splashing out a Chinese-record 15 million euros on Brazilian player of the year Ricardo Goulart.

The “Manchester United of Asia” became China’s first Champions League winners in 2013 but they were shocked in last year’s quarter-finals by eventual victors Western Sydney Wanderers.

But Guangzhou have an early chance for revenge with the defending champions, currently rock-bottom of the A-League with one win from 16, also in Group H.

City rivals Guangzhou R&F are making their debut and they also face a difficult start when they take on Japanese treble-winners Gamba Osaka on Tuesday.

Saudi Arabia’s Al Hilal were enraged by their narrow loss in last year’s final, and they will be without striker Nassir Al Shamrani who is serving an eight-match suspension.

The Asian player of the year was punished for head-butting and spitting after the final, causing a melee, and will not be available until the quarter-finals at the earliest.

Iranian champions Foolad Khouzestan will try to extend their unbeaten run in the competition when they take on Al Sadd of Qatar in Group C, a rematch of their last-16 tie last year.

Foolad were defeated in the two-legged fixture on away goals, a result which meant they departed the competition without losing a game.