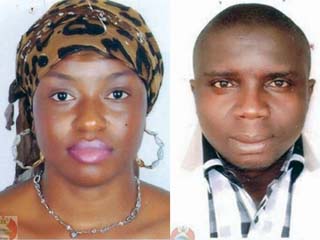 Apart from reportedly defrauding unsuspecting Nigerians of the huge sum, they also allegedly received a loan facility to the tune of N1 million from a new generation bank, diverted the money and refused to pay back.

Nigeria’s anti-graft agency, the Ecomomic and Financial Crimes Commission, EFCC, says the duo are wanted to face allegations of economic crimes against them.

Part of the allegation involves criminal breach of trust, obtaining by false pretence and issuance of dud cheque to the tune of over N1 billion.

“The couple allegedly used their company, Megarice, in operating a Cooperative society of over 400 members whose deposit amounted to over N800 million.

“They (the depositors) were promised a 10 percent monthly interest on their investments which never materialised.

“Also, the couple obtained a loan of N1 million from a new generation bank purportedly for importation and distribution of rice which they diverted for other purposes and also defaulted in repayment,” the EFCC said, describing  Austin as dark in complexion and hails from Ogbadibo Local Government Area of Benue State while Mary, his wife, is from Chukum LGA of Kaduna State.

“Anybody having useful information as to his whereabouts should contact the Commission in its Enugu, Kano, Lagos, Gombe, Port Harcourt and Abuja offices or the nearest Police Station and other security agencies,” the EFCC said.