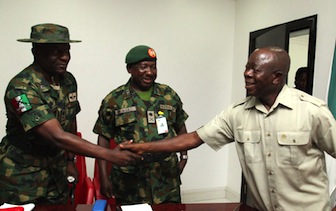 Governor Adams Oshiomhole of Edo state has charged officers and men of the Nigerian Army to remain loyal to the nation rather than be reduced to defending the tenure of an individual‎.

The governor who spoke while receiving the General Officer Commanding 2 Division of the Nigerian Army,Ibadan, Major General Sanusi Muazu, said presidents will come and go, governors will come and go, but the Nigerian nation will remain.
‎
He added that no political office holder should get so desperate and try to use the military to boost personal ambition. “The reason why this has become an issue is because of the nature of our politics and the way political actors have put their personal interest over and above the national interest. Presidents would come and go, governors would come and go, whether they are good or bad. Even the Armed Forces commander would come and go but the institution of the Nigeria Armed Forces would remain. Once we can distinguish between the person and the office, the institutions and the player, we may not have crisis.

“I believe that the forthcoming election with all the tension that people are raising, with all the speculation that Nigeria would have crisis, to me I have seen all these before and the God that created this country would ensure that after all the fog, the weather would be clear. Nigeria would stay.”

“The right of the people to vote for who will be president is a right that must be defended and upheld. Once the process is clean, the outcome does not matter. In a democracy, the people deserve the kind of president they want. He is a product of election and not imposition.

“So I ask you to do everything you can to keep that confidence that the army understands that their mandate is to defend the territorial integrity of the Nigerian nation and not the security of tenure of any political office holder regardless of the level.

The governor while saying that he believes the country must be held together by all means, said, “sometimes when I listen to statements made by other countries especially, those that Nigerian rescued in the past, I begin to wonder that those Nigeria tutored on the art of democracy have now become our tutors.

“We will do our best to continue with the armed forces as an integral part of this state and we trust that you will ensure that the vote counts and that no selfish officer allows himself to be used to intimidate electoral officers. Nobody understands the need for peace and security more than the Nigerian Army.”

In his remark, Major General Muazu, commended the governor for his developmental strides and his support to the officers and men of the Nigerian Army in the state, assuring him, that the Division will discharge its constitutional responsibilities.

“I decided to visit Edo first among the eight states under my control because it is important to the Nigerian Army and the 2 Division and I promise to consolidate on the peace and security prevailing in the state. I know Edo state very well and I know what you have achieved here since you became Governor.

The GOC was accompanied on the visit by very senior officers in the Division including the Commander, 4 Brigade, Benin, Brig.-General O Laleye.