The tide has turned against Boko Haram, says Jonathan 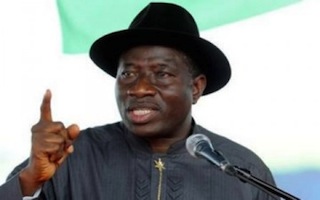 President Goodluck Jonathan on Tuesday said the military was gaining the upper hand against Boko Haram, despite two bombings in the country’s north that killed at least 27.

“The President assures all Nigerians, and the people of the northeastern states in particular, that the days of mourning victims of incessant terrorist attacks in the country will soon be over as the tide has now definitely turned against Boko Haram,” his office said in an emailed statement.

The head of state, who has been criticised for his inability to end the six-year insurgency, described the attacks as the “callous bombing of soft targets”.

Nigeria’s military on Saturday claimed it had retaken the fishing town of Baga, scene of what is thought to have been Boko Haram’s worst massacre in which hundreds, if not more, were killed.

Last week, soldiers retook the garrison town of Monguno, also in Borno state, while Chadian troops, deployed as part of a wider, regional fight against the militants, have bombed militant positions.

The offensive against the Islamists also involves troops from Cameroon and Niger in a reflection of fears about the threat from the group to regional security.

But despite the apparent successes, violence has continued both within Nigeria and also spread to Niger and Chad.

Nigeria had been due to go to the polls on February 14 but the vote was delayed by six weeks to give the military more time to secure and stabilise the northeast, which has seen the worst violence.

The decision by the country’s electoral commission was seen by some as a way for Jonathan, who is seeking a second, four-year term, to revive his campaign.

He had been seen as neck-and-neck with the main opposition candidate, with the chance that his ruling party would be beaten for the first time since Nigeria returned to civilian rule in 1999.

Some have seen the six-week deadline as unrealistic but Jonathan said the military, “supported with new platforms, equipment and logistics”, would be successful “in the shortest possible time”.