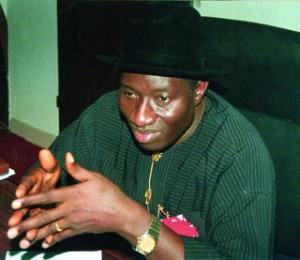 It has emerged that Nigeria’s President, Goodluck Jonathan in a desperate move to win the forthcoming elections has allegedly splashed N10 billion on Southwest Cooperative Societies to garner votes for him in next month’s election.

P.M.NEWS reliably gathered that the meeting the Southwest Executives of the Cooperative Societies held with Jonathan at the State House, Marina, Lagos, Southwest Nigeria last Friday.

Though the president promised to build the first ever Cooperatives University in the Southwest, it was alleged that the leadership of the cooperative societies got $5 million (N10 billion) from the president so that they could support his ambition.

“It was the first time I saw dollars being packed in ‘Ghana-Must-Go’ bag,” a  source at the meeting was quoted as saying.

After the sharing of the booty one of the cooperative zones in one of the Southwest zones got over N200 million after converting the dollars to naira.

There many zones in that particular state, meaning that each state got over N1 billion as their share.

President, Lagos State Cooperative Federation (LASCOFED), Mr Oriyomi Ayeola, who spoke to P.M.NEWS on Wednesday on the issue, said he was aware that Jonathan promised to build a Cooperative University, but that he was not aware of money changing hands.

P.M.NEWS also sent a text message to President Jonathan’s media aide, Reuben Abati, to react to the alleged N10 billion largesse to the Southwest Cooperative Socities but he failed to respond at the time of filing this report.

At the meeting with the Cooperative Societies, Jonathan had promised to build the first Co-operative University in the country to be sited in the Southwest region of Nigeria.

The President said he would set up a study group to examine how such a university functioned in Kenya to determine the various faculties and departments suitable for Nigeria.

Jonathan said the study group would also comprise members of Oodua Cooperative Alliance, OCA, which made the request for such a university.

On Sunday, Governor Babatunde Fashola of Lagos State had accused President Jonathan of distributing dollars during the five days he spent in Lagos.

He said during those five days, the president held several meetings with different groups in order to win their support and splashed dollars on them.

During the five days, Jonathan reached out to different groups such as traditional rulers of various ethnic nationalities, cooperative societies, market women and others to garner support for his re-election on  28 March.