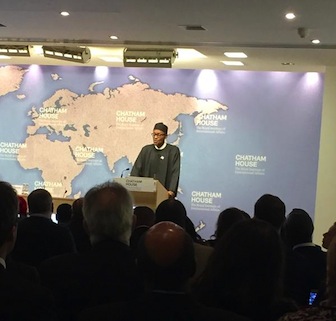 All Progressives Congress presidential candidate, General Muhammadu Buhari, impressed the audience present at his public lecture at Chatham House, London, United Kingdom, Thursday morning as those at the venue clapped for him intermittently in the course of delivering his lecture.

During the one-hour lecture, Buhari reiterated his acceptance of responsibility for his actions as a dictator.

He said there should be no confusion as to where he stands on corruption. However, the General said he has tried to win the confidence of those that are scared of him due to his antecedent as a military ruler.

He told the audience that included scores of Nigerian professionals and academics in the Diaspora that he is poised to run a functional economy and lead Nigeria to prosperity, and not adversity.

He noted that no foreign investor would bring their resources to a state that is insecure, thus security will remains his party’s priority.

“Let me assure you that if I am elected President, the world will not have to worry about Nigeria,” Buhari assured on the issue of security.

According to him, apart from the civil war era, at no other time in Nigeria’s history has the country been this insecure.

Speaking on the question of what Nigerians should expect on his first 100 days if he wins the 28 March presidential election, Buhari said nobody should expect miracle but his major priority would be to block all financial leakages and plough whatever could be saved back into the economy.

He noted that 60 per cent of Nigerians are youths, and most of them are unemployed, a problem he assured will be tackled.

On the war against insurgency, Buhari praised the military for their continuous bravery. The former Commander-In-Chief said the soldiers have neither received the necessary support, nor the incentive to tackle the insurgency. He assured that the APC government will ensure that the military are well taken care of.

He also pointed out that the people in the north are doing their best to fight Boko Haram.

“They are the biggest casualties,” he said, as he linked the early spread of Boko Haram to poverty, idleness and frustration of people living in rural areas.

Also speaking on Sharia and Islamisation of Nigeria, Buhari reiterated his belief that Nigerian constitution is supreme and clear on the issue of religion.

“Anybody that wants to implement Sharia in Nigeria will have to change the constitution first,” he said to a rapturous applause.

Meanwhile,  during the lecture, protesters believed to be supporters of the Peoples Democratic Party, PDP, and All Progressives Congress, APC, besieged the Chatham House venue of the lecture with various placard.

An amorphous group called the Civil Society and Support Groups-Diaspora coordinated the protest against Buhari after an alleged mobilisation fee of $20,000 was paid.

The growing support being enjoyed by Buhari from the international community and global leaders was identified as the driving force behind the move for the protest staged to embarrass Buhari while he delivers his lecture.

Ayodele Fayose, Ekiti State Governor, who has been sponsoring series of hate and death wish advertorials against Buhari has been accused as a major financier of the latest protest.