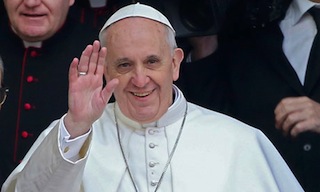 A homeless man has been buried in the exclusive Teutonic Cemetery within the Vatican in the latest sign of how Pope Francis’s concern for society’s most vulnerable is changing the way the Church does things.

Willy, a Belgian who lived on the streets around St Peter’s until his death in December, was well known to many priests, some of whom used to bring him food, Vatican radio reported.

He died after being hospitalised with the symptoms of exposure. His burial in a cemetery normally reserved for senior German clerics was funded by a donation from a German family.

Francis has made a focus on the rights, welfare and dignity of the poor one of the central themes of his papacy, reflected in his maxim that he wants “a poor church, for the poor”.

Earlier this month, showers for the homeless were installed in public toilets just yards from St Peter’s square, at the Argentinian pontiff’s request.

To mark his birthday in December, Francis ordered the distribution of dozens of sleeping bags to homeless people across Rome, and parishes in the Italian capital have been asked to follow suit with similar initiatives.