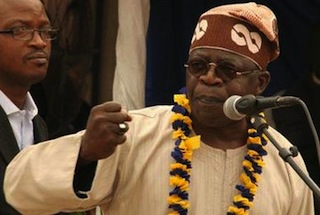 In a statement issued by Sunday Dare, Special Adviser on Media to Tinubu, the former Lagos state governor reckons that the PDP campaign continues its descent because the truth stings them harshly.

It noted that the PDP campaign has become a factory of lies. “A few days ago, the agent of character assassination who doubles as the busy hatchet man of the PDP accused Asiwaju Bola Tinubu of plotting to be vice president then President through subterfuge. Clearly, he has exposed the confusion and contradiction within his party and has veered off from the real debate. But he cannot avoid the storm of change already unleashed by the APC,” the statement said.

“However, the only subterfuge involved in this entire episode, is that eating at Fani-kayode’s mind. His mind is an agent of mayhem and a foreigner to facts. The last time we looked the APC ticket was a Buhari/Osinbajo one. That is what is and that is what shall stand.”

“Fani-Kayode is not as smart as he thinks. If you read between the lines of his hysteria you see another extreme sentiment: that of surging desperation.

“His statement indicates that even he now realizes that his paymaster has lost to Buhari/Osinbajo. The game is over. The whistle has blown. What the fantasy man seeks to do is change the game. He seeks to run against Tinubu in hopes the outcome will be better. Fani now grasps at straw in the night wind.”

“Fani Kayode is on a futile journey to shield the populace from seeing the failures of his paymasters. His statement taken in context indicates that his paymasters will lose the election. They are now worried about what will happen thereafter. The majority of Nigerians have concluded that they have done enough damage to our politics, economy and security; and cannot be tolerated any longer. Rather, they should be voted out by the people. Their journey of lies and deception is at its terminal point. It lied to Nigerians and the international community that elections had to be shifted first because of the PVC issue and later it became a security ambush to change the date thus aborting Nigeria’s date with destiny at the polls.”

The statement then berated PDP for appointing Fani-Kayode. “That FFK is the best a ruling party can do as a spokesman speaks volumes about the PDP. They are bereft of talent and character. They are filled with lies and chicanery. FFK is simply the worst and most outspoken of a bad lot. However, we welcome his interventions. They are of such low quality and base character. His utterances frighten people but not in the way FFK intended.

“Instead of scaring the people away from the APC, his work scares people that someone so unfit is so close to the seat of power, someone so unhinged is given free rein to spit bile and call that public discourse. One must wonder who is unbalanced, the misfit or he who hires him. Keep at it FFK. Continue!

“Most Nigerians are fed up with this government and desire change. They await eagerly that opportunity at the polls. They cannot tolerate four more years of a Fani Kayode of his paymasters and his utterances . That is your agony Fani Kayode and of course that of the PDP and its gang of destroyers. You will not be able to persuade majority of Nigerians who are prepared to use their vote for a positive change. And if only to shield the populace from your peculiar brand of abuse of power both you and your boss must go. The APC is committed to bringing reforms to our institutions, recovery to our economy and relief to millions of our citizens who are suffering.”

“This latest episode shows that Fani Kayode’s hallucinations are now uncontrollable. Again, unable to make headway against Buhari and Osinbajo he now wants to run against Tinubu.”

“This plot will not work. Tinubu is not scheming to become president through the back door. He, just like any qualified Nigerian has the right to walk in through the front door if he so desires. But he is not on the ticket.”

“For the job he is hired to do, it is expected that a Fani Kayode will be blinded to the positive nature of the Buhari/Osinbajo ticket. If he has failed to read and do some research on the character of Osinbajo, let me help him. Yemi Osinbajo is fiercely independent. A brilliant mind of great character and a consummate reformer and legal crusader. You will not dare speak of him in this manner. The APC ticket is of people of great resolve. But because among your own crowd you have people who will willingly destroy not only our institutions and country you think so of others. APC is a party with people of impeccable character.

“Courageous and patriotic leaders who are out to rescue our nation. And you, Fani Kayode are on record to have said so in several interviews. If FFK cannot recognize that Tinubu is a talent seeker, man of vision, one who creates opportunities for the best minds to thrive and serve the public, then he deserves our pity.

“Tinubu’s hand is writ large in the brand of good governance pervading the South West and other parts of Nigeria. He is a hunter for talents as exemplified in Babatunde Raji Fashola of Lagos who has redefined governance. Talented and hardworking Ibikunle Amosun of Ogun State. Indefatigable Rauf Aregbesola of Osun State. Eclectic Abiola Ajimobi of Oyo state. The relentless Comrade Adams Oshiomhole of Edo State. And until recently, Kayode Fayemi who served Ekiti well. Yemi Osinbajo belongs to this tribe of excellent public servants.

“The APC still parades other governors who continue to excel across the country. The likes of Governor Rabiu Kwankwos in Kano, the tireless Governor Wamakko of Sokoto State and other governors in Borno, Rivers, Yobe, Kwara- all of them committed to bringing change to their people.

“Bola Tinubu help build the great platform for change, wholeheartedly work and supports the APC ticket because he believes it is the last best hope to rescue Nigeria from the disaster FFK and his ilk will want to continue to rule us if allowed to. I pray Nigerians will not allow them to misgovern us a day past May 29. If FFK pretends not to know of Tinubu’s efforts to build and support the APC, it comes as no surprise.

“Fani Kayode tried before to be part of the party but left when he found out there was no room for his games. Because APC could not help to free him from EFCC and Aviation fraud he ran away to the party that blocked the EFCC on his behalf.

“On record are Tinubu’s efforts and his contributions to rebuilding the nation and ensuring its democracy. They are his patriotic obligation. People like FFK will never understand this. Patriotism is not part of their personal constitution. Everything they do has a private beginning and personal end. They do nothing regarding the public purpose except lie about it.

“I will not dignify FFK’s outrageous lies with any reply. All I know is that Nigerians know that he is a peddler of falsehood. And millions of Nigerians are with APC and its leaders.

“Tinubu, like millions of APC members is pleased with the performance of the APC ticket on the campaign trail and looks forward to greater accomplishments from the Buhari /Osinbajo team once in office.

“Let me restate that Tinubu is a committed democrat and he has demonstrated that times over. He is one man that has chosen to serve this country to the best is his ability. By God’s grace, the support of millions of Nigerians APC will go on to win the March Presidential elections and General Buhari and Osinbajo will go ahead to be sworn in to lead this country to better times.

“Femi Fani Kayode cannot just leave Tinubu alone because they see him as their political nemesis. But Tinubu will not be their dart board . If they want to see the culprit behind their flagging misfortune, they do not need to glare at Tinubu. They should go home and peer into the nearest mirror. Therein their trouble lies.

“Now that FFK has revealed why his party, the PDP has consistently persecuted Bola Tinubu through phony Code of Conduct Tribunal, massive unjustified attacks against his character and integrity, intimidation and harassment. They all have failed. In what is a classic case of abuse of power, the government you now work for have accused Tinubu in the past of baseless and unproven allegations whereas in your party, including yourself there are wolves feasting on the commonwealth of the people. For a leadership that cannot define corruption and theft, we are left with a gang of plunderers. You have openly and secretly stolen and plundered the wealth of the nation without the slightest concern about morality and the suffering masses.

“The fiction of a thousand Fani Kayodes cannot stop an idea whose time has come. The APC is committed to upholding and respecting the tenets of democracy and of bringing a new government that will usher in a new day for a new Nigeria. And that is what Fani Kayode and his party cannot handle.
The nation has had enough of their shamelessness. Please pack up. It is time to go,” the statement said.